In the months leading up to the announcement, intense pressure was put on Trump to stay in Paris from every direction — environmental pressure groups, Democrats in Congress, mainstream media, Hollywood celebrities, countless CEOs of international corporations, and several members of his own administration, including Secretary of State Rex Tillerson. The push by world leaders peaked at the G7 summit meeting in May 2017 in Sicily, but in the end all the cajoling and coaxing from Prime Minister May, Chancellor Merkel, President Macron, and EU Commission President Juncker did not convince Trump to break his campaign promise. 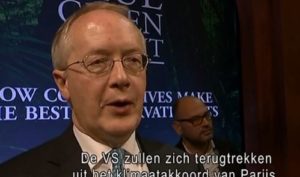 Whatever the motive, his comments have led many political leaders and informed observers in London and other European capitals to a serious misunderstanding. Here is just one example: the French President Emmanuel Macron said in his address to Congress in April, “I’m sure, one day, the United States will come back and join the Paris agreement.”

To understand why the US is not going to be lured or dragged back into Paris, it’s necessary to take seriously President Trump’s energy agenda and the critical role it plays in his programme to revive economic growth to its historic rate of 3 per cent per year — a level never approached during President Obama’s eight years in office. There are two parts to the administration’s energy agenda: increasing energy production; and using America’s energy price advantage to unleash a manufacturing renaissance. …

The US still uses more oil than it produces, but within a decade is likely to become a net oil exporter. The effects of this stunning turnaround are already being seen in the US trade deficit. Petroleum products accounted for over 30 per cent of the trade deficit in 2008, but less than 10 per cent last year — or a swing of $233 billion.

The effects will also increasingly become apparent in world politics, especially now that Mike Pompeo has replaced Rex Tillerson as Secretary of State. As the energy superpower, America’s geopolitical position becomes much stronger as the position of Russia, Saudi Arabia, and the other petro-states wanes. As for China, it is now the world’s largest energy user. Although China mines and burns more coal than the US (which is second in both categories), it produces roughly only one-third as much oil and one sixth as much gas as the US. Energy imports are likely to be a growing drag on the Chinese economy at least for several decades.

What should the US do with its immense reserves of coal, oil, and gas? President Obama and his allies in the climate industrial complex thought we should keep as much of it in the ground as possible. After failing in his first term to get legislation through Congress to restrict the use of fossil fuels, in 2013 Obama turned to using the Clean Air Act to promulgate new regulations that would force the closure of many existing coal-fired electric plants and ban the construction of new coal plants. …

The effects of Trump’s energy deregulatory agenda are likely to be huge. Lower energy prices will obviously benefit consumers. Electric rates for households in many American states are below 10 cents per kilowatt hour, while in Britain the rate is 22 cents and in Germany 35 cents. True, Californians and New Yorkers are paying 19 cents, but they and several other states controlled by Democrats are pursuing the European Union’s energy–rationing policies and indeed have promised to keep their share of America’s Paris commitments to reduce emissions.

Keeping electricity rates down is also going to give manufacturers a large energy price advantage over competitors in other countries. Energy–intensive manufacturing is already coming back. The number of jobs in manufacturing is a defective measure because manufacturing output can increase while employment drops due to productivity gains from automation. Nonetheless, it is significant that manufacturing lost over one million jobs in Obama’s eight years, but gained 183,000 in Trump’s first year. ….

As the European Commission states in the first sentence on its Climate Action website and in bold type:

The fact is that the Paris climate treaty is a document expressing good intentions — what is currently called virtue signalling — for every country in the world but one. When the United States makes an international commitment, it stands by its commitment. If it doesn’t, then private parties, which in this case would be that environmental pressure groups, Democratic state governors, and perhaps multinational oil corporations, file suit to force the federal government to keep its commitment. …

Thus staying in Paris would threaten to stymie President Trump’s ambitious plan to revive the American economy through deregulation and on the foundation of immense energy resources. If that plan succeeds, then US greenhouse gas emissions are going to stop declining, as they have done for the past decade, and start increasing again. The Paris treaty’s self-imposed economic straitjacket would make that impossible. ….

By making what still seems a stunning U-turn on climate and energy policies, President Trump has every prospect of leading the United States to a more prosperous and brighter future. Britain, the EU, and the rest of the world would do well to consider following his lead.

Climate scientist James Hansen [een fervente Amerikaanse aanhanger van de menselijke broeikashypothese] called it “a fraud really, a fake.” President Donald Trump called it “a massive redistribution of United States wealth to other countries.” And this odd couple of alarmist scientist and skeptical politician agreed: the Obama-led Paris climate accord was all about lobbyists and imaging, not climate change.

Trump’s decision, one year in, remains bold, brilliant, and correct. And it will only get better as the rest of the world confronts the disconnect between what economic coordination and progress require and what starry-eyed bureaucrats want.

Consumers desire the most affordable, plentiful, reliable energies. Taxpayers favor neutrality, non-involvement. And governments ’round the world need to direct their limited resources to real here-and-now problems, not speculative, distant, unsolvable ones. As such, the U.S.–side Paris–deflating decision is pro-world, leaving only parasitic bureaucrats in the cold. …

President Trump’s statement one year ago today on the Paris pullout comprised 2,500 words. Here are some highlights:

The case against the Paris Agreement has only grown stronger as its “worthless words,” as Hansen called them, have run up against the reality of a business–as–usual mineral–energy world. China and India are going big with coal. The European Union’s CO2 emissions are rising. And a globally– connected natural–gas world emerging from the shale–gas boom is locking in a fossil–fuel–future for decades to come.

“The president made a tremendously courageous decision by saying we’re going to get out of the Paris Accord, put America first, and make sure that we lead with action and not words,” stated EPA Administrator Scott Pruitt. In fact, Trump’s announcement goes down as one of the greatest single energy–policy moments in recent history …