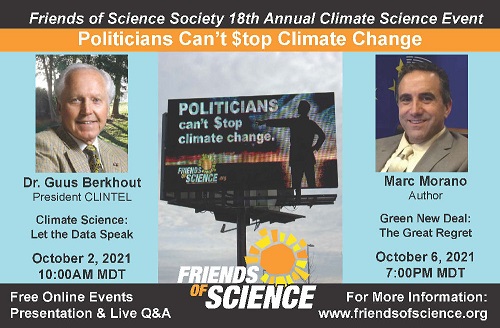 Each event will feature a live introduction by host, Michelle Stirling of Friends of Science Society, followed by a playback of the pre-recorded video of our speaker presentation, and then the viewing audience can join in the live Q & A with the guest speaker, moderated by our host.

Each event will feature a live introduction by host, Michelle Stirling of Friends of Science Society, followed by a playback of the pre-recorded video of our speaker presentation, and then the viewing audience can join in the live Q & A with the guest speaker, moderated by our host.

Prof. Dr. Ir. A.J. (Guus) Berhkout is the President and co-founder of CLINTEL, the climate intelligence organization of more than 900 scientists and scholars from around the world, who report that there is no climate emergency. Dr. Berkhout has been a science and technology innovator all his life and is the author of several hundred scientific papers. Dr. Berkhout is a member of the Royal Netherlands Academy of Arts and Sciences (KNAW), the Netherlands Academy of Engineering (AcTI), and honorary member of the Society of Exploration Geophysicists and the European Association of Geoscientists and Engineers. In 2008, he was honored with Royal Decoration “Officier in de Orde van Oranje Nassau.” See full bio here.

Professor Guus Berkhout tells us that we should stop relying on immature climate models and better listen to what real measurements have to tell us: “LET THE DATA SPEAK”. He starts his presentation with a big picture of the Earth’s climate system and makes us aware that we have heated debates on tiny details, while we do not yet agree on the big picture. Moreover, he points out that Intergovernmental Panel on Climate Change (IPCC)’s conclusions are based on dubious evidence and assumptions.

In the second part of the talk Prof. Berkhout makes clear that the famous Global Warming Curve is the result of a double averaging process (‘double folding’). He makes clear that this folding process kills all causality information in the climate data. It may account for the very poor scientific progress we have seen in the past forty years. He introduces the concept of CLIMATE IMAGING and explains why images should be unfolded and multi-scale, and why images should consist of observations along circles of longitude (’North-South images’) and circles of latitude (‘East-West images’).

Marc Morano, publisher of CFACT’s Climate Depot and the Author of new book Green Fraud: Why the Green New Deal is Even Worse Than You Think. Marc also served senior staff on the US Senate Environmental & Public Works Committee and authored the 2019 book, “The Politically Incorrect Guide to Climate Change” and the films “Climate Hustle” and “Climate Hustle 2”.

If you really care about the environment, government policy would be the opposite of what the UN and the Green New Deal proposes. Marc will show how free markets, economic prosperity, technological revolution, and wealth result in the cleanest environments.